At the end of the 1960’s the northern end of the Hex River valley was experiencing a serious drought and at the time Anton was farming with his father and brother Leon on the family farm north of De Doorns. These difficult circumstances prompted Anton to look for opportunities elsewhere and when a farm became available at Hex River further south in the valley in 1969 he bought the farm largely because of its good water sources and development potential. (at the time it was called “Natplaas”, which means wet farm) and it was later renamed Werda. The first harvest on the new farm only realised 40% of the projected production as the farm was hit by hail but despite this setback expansion and production increased by 1976 the farm produced 100 000 cartons.

In 1985 Anton bought Vreesniet, a farm with good expansion opportunities in the Sandhills area of the Valley. Later in 1992 this was followed by the purchase of Mon Desir as this farm was close to Werda and had a good water allocation from the Hex River Mountains.

In the 1970s the two grape production regions in the Western Cape were Paarl and the Hex River Valley but during the early 1980’s table grapes at Saron and Porterville developed rapidly due to the good income grapes from this area were returning from their early production. Anton and his brother Leon realised that it made good business sense to develop a farming operation in this area as well. After hiring a plane to fly over the area to see the lie of the land from the air they bought Heimat, a farm on the banks of the Berg River near Piketberg. Initially this was in partnership with two other partners but after four years they bought out their shares in the business. This property has been developed into a 75ha table grape unit and is still run as a joint operation.

The quest for earlier production then spread further north to the banks of the Orange River from Upington westwards. Here farmers had previously produced grapes for raisin production but from the early 1980’s the lucrative return from placing grapes on UK supermarket shelves prior to Christmas was the impetus for development of the table grape industry along the Orange River. It made good business sense to secure a stake in this trend and in 1994 Anton bought Raaswater on the Southern Bank of the Orange River at Louisvale, 20km west of Upington which has now been developed to a 150ha grape farming unit.

The quest for earlier production continued to drive development ever westwards along the Orange River and in keeping with this trend, Anton investigated the Orange River between Goodhouse, Pella and Vioolsdrif by road and later also hired an aeroplane to study the landscape from the air. This process led to the purchase of Styr-Kraal, 600 hectares of irrigable land on the Southern bank of the Orange River near Onseepkans. This farm is approximately 200km west of Louisvale. The landscape is harsh and unforgiving and akin to moonscape. In summer the daytime temperatures soar into the mid 40’s, but this heat and access to water are what is required for early grape production. “When I took my cautious, conservative financial adviser of many years to see this remote and inhospitable place, he just shook his head and told me I was mad,” laughs Anton thinking back to those days!

Looking back today at times I tend to agree with my financial advisor,” muses Anton. “I suppose that my enthusiasm to get the job done and get the production going made me tackle the challenges (and they were considerable!) head-on. At that stage we were getting all our development materials supplied from the Western Cape as the industry support infrastructure had not developed in the area yet.”

Initially the accommodation at Styr-kraal was in army tents and supplies were bought from the neighbouring farm Raap en Skraap which fortunately had a farm shop. Later two young managers were appointed and they continued developing the property and today there are 100 ha of vineyards at Styr-kraal.

More recently three more farms in the Hex River have been added to the operation namely Uitkyk, Nirvana and Alpha. During 2016 Villion Farms purchased Oude Schuur at Nuy in the Breede River Valley. Currently AS Viljoen Boerdery has 15 farms – 5 units along the Orange River, 1 unit in the Berg River area (in partnership with Leon) and 9 in the Hex River Valley (including Oude Schuur at Nuy).

Anton Snr. was voted Western Cape Farmer of the Year in 2003.

ASV Farms is a true family business. The Viljoen Family have been farming in the Hex River Valley for generations and exported the first grapes from the area in 1896. Anton Viljoen represents the fifth generation of Viljoens to farm with grapes in the Hex River Valley and his sons represent the sixth generation. The family have been involved with grape production and exports for more than a century. 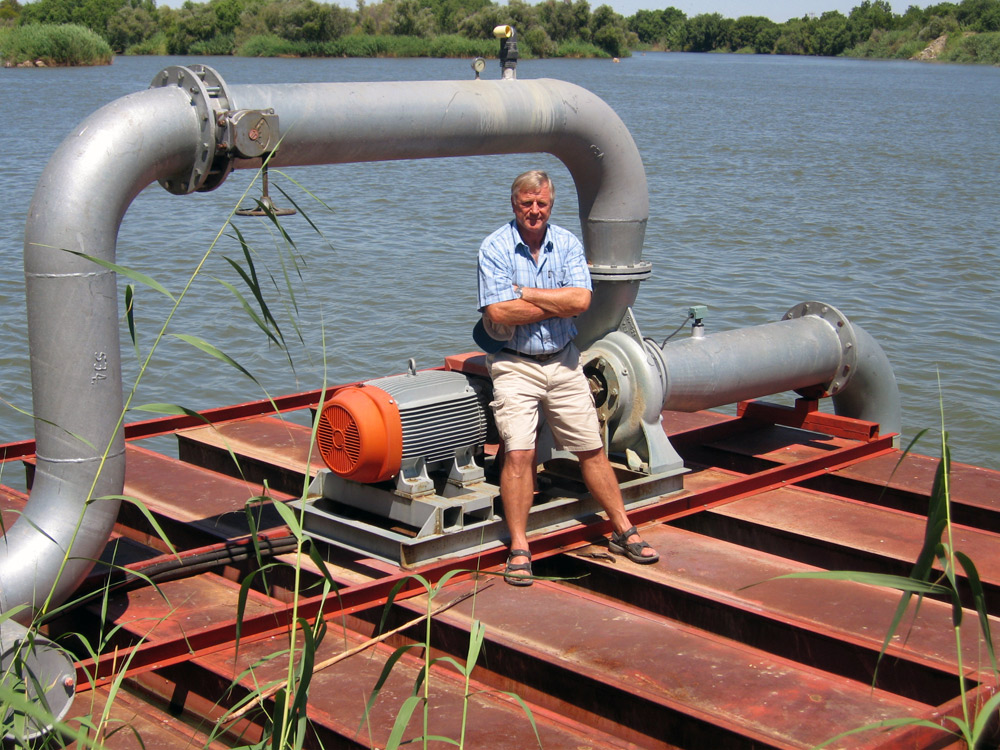 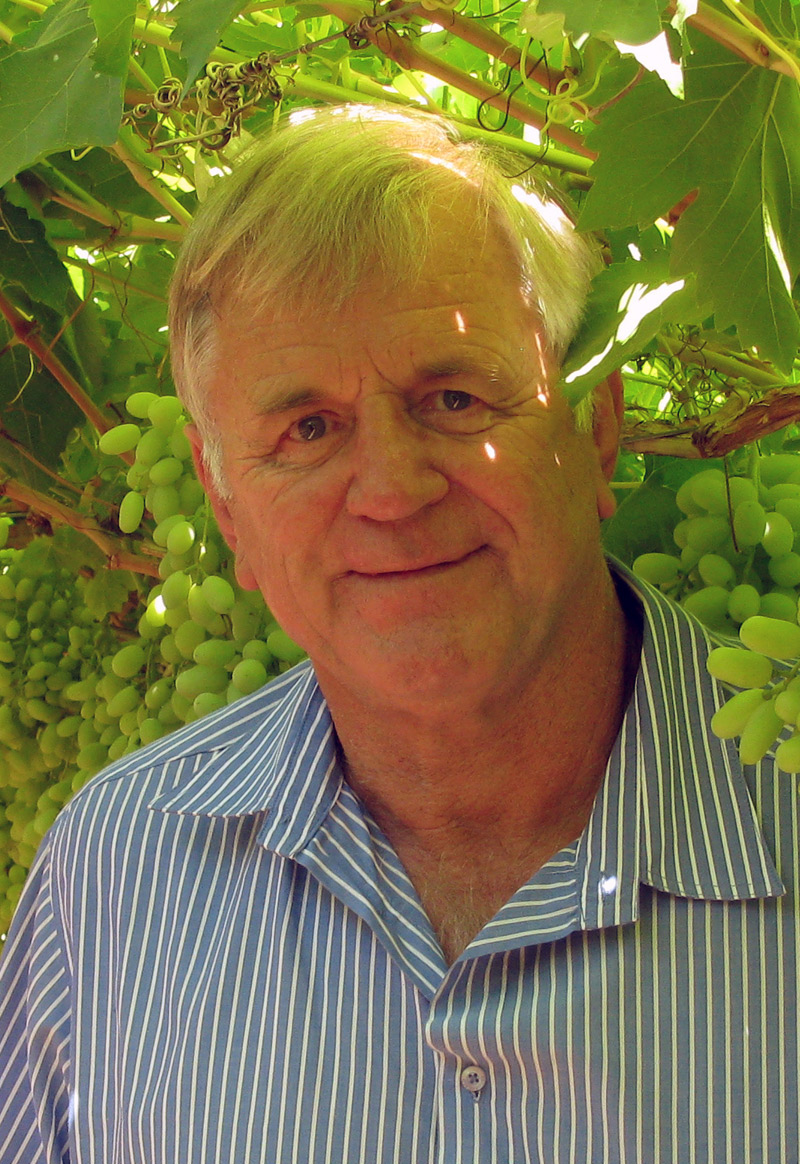 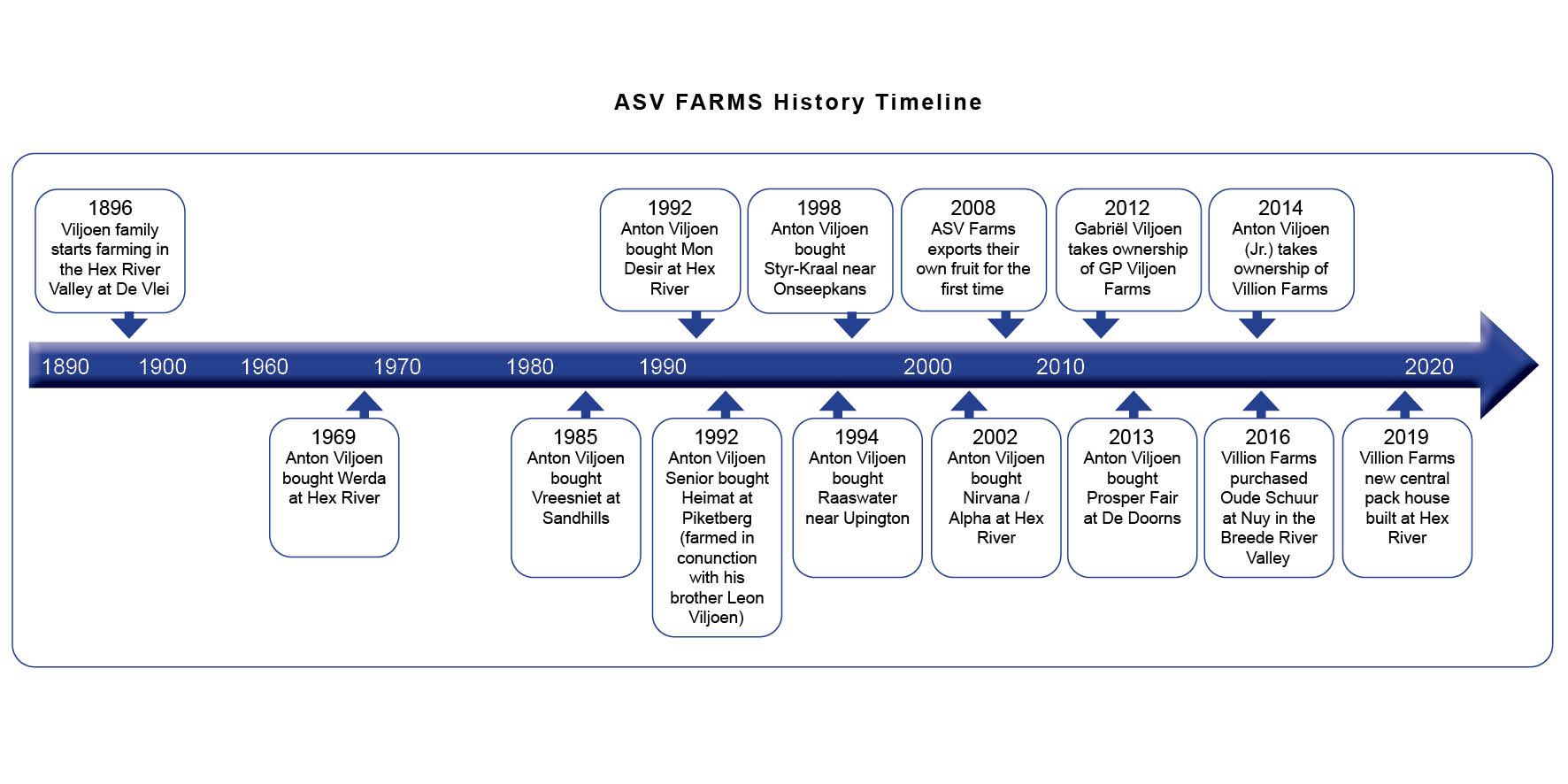